“I think it did have a reputation of a rough place, but I feel like creativity has always lived in Glasgow.” These are the words Flint, one of the Glasgow School of Art students used to describe his school in the 2017 iD Magazine documentary. Known all over the world for incredibly high standards, attention to detail and eco-friendly approach, Glasgow School of Art is definitely a place filled with ideas, inspiration, and creativity. I think most people would definitely agree with Flint’s statement. In Glasgow, you can walk into a bar on Sauchiehall Street and see the upcoming band playing a gig, hear buskers around every corner, or pop into the CCA to see an independent film with your friends, rather than yet another LEGO movie in a mainstream cinema chain. Despite the big appreciation for music and cinema in Glasgow, its captivating fashion scene remains a bit of a niche. I caught up with Julia Knie, the second-year fashion student at the GSA to ask her more about that. After being introduced to her fellow students and the studio in which she spends long hours working on different projects, I was impressed by the hectic atmosphere and the amount of effort they put into their course. Click below to listen to the interview. 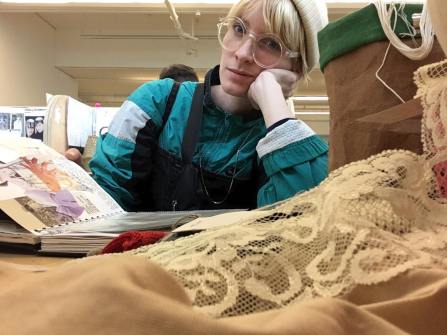 Help me grow the site by sharing, PLEASE: